The province of Frosinone covers an area of 3,239 square kilometres, encompassing 91 county towns with 478,393 inhabitants (ISTAT, Italian National Institut for Statistics, 1995). It has an elongate shape with the main axis pointing towards the Apennines (north-west / south-east).
Three morphological units can be identified in the whole of the territory: the Apennine ranges, which include the Simbruini and Lepini Mounts as far as the Meta-Mainarde group; the Subapennine ranges, formed by part of the Lepini Mounts, the Ausoni and the Aurunci Mounts; the Latina Valley, a wide depression, dividing the Apenine from the Subapennine system.
The Apennine ranges, which trim the entire province from N to NE, mark the natural border with the Abruzzi and Molise. It is a mountainous system characterized by mounts, ranging over 2000 metres, such as the Viglio Mount (2156 m), Pizzo Deta (2041m) and the Meta Mount (2241). These are the highest mountains in the province.

The Lepini, Ausoni and Aurunci Mounts crown the borders with the provinces of Rome and Latina, from west to south. These three different mountain ranges, which are part of the Latium Subapennine, make as a whole a homogeneous geographical area, well defined from a geomorphological, historical, cultural and environmental point of view. Until the end of 1700 these mountains were known and united under one name: Volscian Mounts. Some of the most impressive peaks of the Lepini, Ausoni and Aurunci Mounts are: Mount Alto (1416m), Mount Cacume  (1095m), Mount Calvilli (1116m), and the Mount Fammera (1184m), which is characterized by steep crags and overhanging rocks with morphological gradient, exceeding 500 metres.

Both mountain systems (Lepini-Ausoni and Aurunci-Simbruini-Ernici, including the Meta-Mainarde group) have the typical Apenine alignment, whose direction is NW-SE. This alignment risults directly from the compressive thrust between the African and the European plates, whose main direction is E-NE. The formation of the Apennine chain goes back to the geological time, to the Miocene epoch (some 24 to 5 billion years ago), when the collision between these two plates was so strong ,that it led to the complete formation of the Apennines.

These carbonatite mountains are characterized by a typical karst environment. They have a harsh landscape, almost without flowing water on the surface, with large plateaus spotted with basins covered by residual red soils. This landscape ist the result of a series of phenomena, started some billions of years ago (from the Quaternary, around 2 billion years ago, up to the current period) and  which brought about a slow process of rock erosion, both at surface (epigenetic) and subsurface levels (hypogene). Carbonatite rocks, usually insoluble, become highly soluble when they meet acid waters (i.e., enriched with carbon dioxide), as raining waters are.

Meteoric waters exert a cheminal as well as a mechanical action over carbonates; they can bring about the dissociation of these lithologies under given climate conditions; this leaves on the ground only insoluble residues, like red clayey soils, enriched with oxides and consequently very fertile. On the rock walls shallow cuts appear initially, then gullies which become increasingly marked and deeper. The most common epigenetic karsic formations are dolines, hums, striped plains, wells. Various examples of impressive karst phenomena exist in the province of Frosinone: the Tomolo (630 metres large, 130 metres deep), a doline, at the border of which the Medieval inhabited centre of Campoli Appennino rises; Pozzo D’Antullo, a deep chasm, 150 metres large and 60 metres deep. The hypogenetic phenomena of karst erosion are spectacular and fascinating.

The acid waters, flowing through the fractures in the rocks, manage to dig winding tunnels, so that they create vast cavities, such as caves and abysses, which can extend for kilometres. Covered by stalactites and stalagmites, only when the evolution process of the karst is completed, they create a bewildering and unique world beneath the earth’s surface. The Pastena Caves, among the most beautiful in this area, consist of a fossile branch, which winds for 880 metres, and an active branch, some 2000 metres long. Another example in Ciociaria is the Collepardo’s Cave.

The Latina Valley is the most wide depression in the province; it divides the Lepini – Ausoni – Aurunci range from the Simbruini – Ernici – Meta – Mainarde Mounts. With an Appennine development, the Latina Valley is narrower north-west of Frosinone and becomes increasingly wider towards south-east, where it converges in the large Cassinate depression, at the border with Campania. In the stretch north of Frosinone, the Latina Valley is better known as the Sacco Valley, since it is traversed by its namesake river, which begins in the province of Rome. A tributary of the Sacco is the Cosa, whose source is on the Ernici Mounts; it flows in the Sacco north-west of Ceccano, after having traversed the centre of Frosinone. The meandering course of the Sacco flows into the Liri near Isoletta.

The river Liri, whose source is located in the Abruzzo Apennines, is certainly a significant morphological element in the southern area of the province and in the Sora valley. After having crossed the Sora Plain with its winding course, the Liri reaches Isola Liri, where hurls down a 30 metres drop, thus forming the famous waterfalls. An important tributary of the Liri, besides the river Amaseno, is the Fibreno, whose regional spring-head is on the carbonatite mounts of the Roveto Valley and the National Park of the Abruzzo (NPA).

The source of the Fibreno is important both for the good quality of its water and for its abundant rate of flow, some 10 cm/s. Southwards (Pontecorvo-Cassino area), the only markings of the ancient lake plain of the Quaternary are sediments and fossils (clay silts and limestone sand with cross stratification, grey and ochre clays, sand and gravel with malacofauna dulcicola). The morphological continuity of the Apennine montainous system is broken by fluvial-tectonic valleys with an anti-Apennine development and a differently marked erosion.

The most important among them is the Liri Valley; of minor importance, but not for their beauty and einvironmental resources, are the Melfa and Rapido Valleys (from the Canneto Valley, in the NPA, and the Roccasecca gorges, to the linear source of the Rapido). These fluvial valleys, with a  NE -SW direction, formed on pre-existing tectonics boundaries (fault planes, fractures and areas of weakness in the rock) along which streams and rivers flowed, sculpturing their ground. The big water supply to the river Liri is provided by the source of the river Gari, whose rate of flow reaches 18 cm/s. The river Gari, with a costant rate of flow along the year and an extremely steady flux, is the biggest source in Centre-South Italy.

The convergence of the Liri and Gari forms the Garigliano, which marks the border between Latium and Campania. The big mountainous structures in the province encompass also areas characterized by a great concentration of cultural and einvironmental resources. Consequently, there are protected territories, such as the Latium slope of the National Park of the Abruzzo, the Regional Nature Reserve of the Fibreno, the Regional Park of the Simbruini and the Regional Nature Reserve of the Aurunci, where experiments on new and sustainable opportunities of development are carried out. 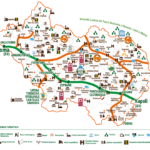